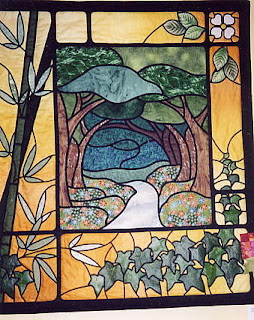 This is a beautiful quilt that was in that quilt show in 2000. I was in AWA of this quilt because of the very small black bias, around everything!!!! The stain glass effect.... I really really liked this quilt!!

Below is picture of my second son when he was 4 years old. He was not as happy as his brother. He was born in the station business. He did not get the attention that David got from his Mother. When David was little he had his Mother full time, poor Don did not. When Don was not walking he was at the station all day long. David was a lot of the time too, but David was so in to the people that came in the station. He would great everybody with a big smile and a big Hi!! The customers were like family to him. The customers loved the kids too.
Don , was a whole other kid, when he started to walk he started getting in to everything that he should not get into. Once he started to inspect a parked motorcycle and it fell on him!!! He did not get hurt, only a bump. He and we were so lucky!!! I have hundreds of stories about station life with kids!!!!!!!
Thanks so much for coming to read my blog.
Love, Fern 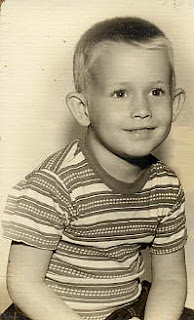 P. S. I think he was a beautiful little boy and I wish I had had more time with him, one on one.
I was so lucky to have had two really good looking boys.
Posted by animal lover, quilt lover at 11:54 AM