Old Days of when my Bruce was with us 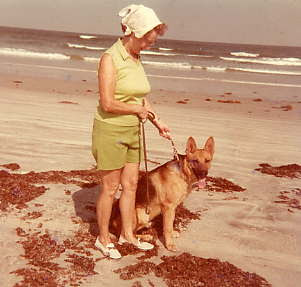 I moved to north Florida in 69. That was 5 and a half hours or longer away from where Mother lived. She was not happy about the move, it was to far away. Me being an only child, it was up to me to care for her in her older years. It was a new adventure. I was happy about the move except I had to leave my dream house, that hurt some. To make a long story short she said that I had to come down to see her 2 times a year until she could no longer care for herself. Then she would come and live with me.

I did as she asked for a lot of years. This picture was taken on one of those visits. We would go to the beach and to the park to walk Bruce. The picture of me and Bruce was taken on the same visit as the one of Mother and Bruce, two different days.
There is a lot more to tell about my Mothers last 5 years of life, but we will save that for another post. 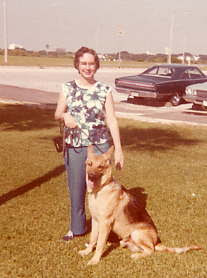 Bruce was a neutered male, that was gotten as stud fee when the Shepherd that was my first hubby's dog, mated with a GSD female. I had cancer and had to have surgery. I had that surgery and came home with a GSD puppy. He had gotten Bruce for me at an awful time. I was in no condition to take care of a 7 week old puppy but here he was, and here I was, just out of surgery. I had had uterine cancer and had to have a hysterectomy. The people who had had him had been calling him Brute. I did not like that name at all!! So I called him Bruce. 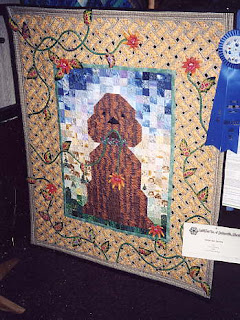 Here is another picture of a quilt that I liked very much at that quilt show I told you all about last post.

Well everyone I did it again. I posted and uploaded the pictures by myself. I will try again tomorrow and see if I remember how. I think I will be able to do it again.

See you all again tomorrow. Love you all Fern