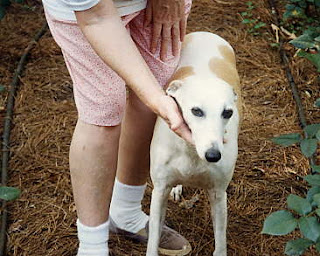 I called her Miss Amanda because she was such a lady. She was prissy. She was an angel!! She was a delight to have around. She cost us the most of any animal we have ever had. Amanda had internal problems and she had a rare form of anemia. The vets around here could not put there finger on what was wrong, so we ended up taking her to Gainsville to the veterinarian
hospital. They did over 3,000.oo$ worth of tests to find this all out. After there was weekly maintenance after that. Amanda came to us in September 91. We took her to Gainsville in 93, & she left us at 10 years old in 97. I did not want another dog for a long time . By March of 98 I was ready for another rescue dog. Bambi came home with us March 5 98. 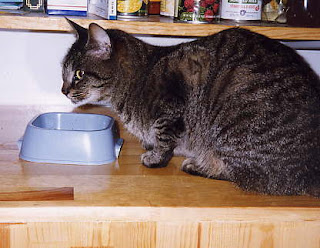 Tom says I don't gave Happy enough time. We love happy very much! She picked us, we did not pick her. We were without any animals from June 97 until Happy came in January 98. We had lost a cat from a heartattack in that June. It was the 1st time in I could not remember when that we did not have a animal. Of course we were feeding the birds and the other outside critters, so it did not feel so lonely. When Happy showed up I was ready for her. It was a pleasant surprised when she just walked up saying here I am , I have picked you. Than when we took her to the vets and learned she had been spayed it was a great bonus. 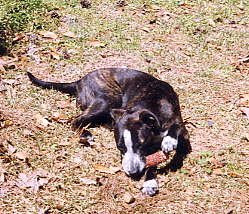 Bambi loves corn on the cob!!! Really she loves a lot of vegetables. But corn is probably her favorite. Here she is finishing of an ear.