Years ago I was feeding a female coon I named Dottie.  Dottie had 3 babies. 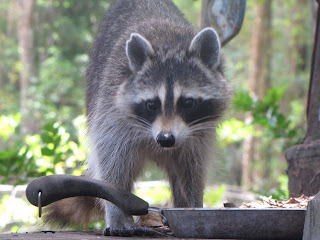 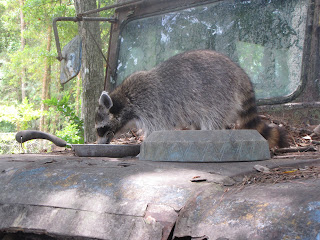 I named one Johnny and one Donny and the girl Betty.  The raccoons babies stay with their mother through the summer fall and winter.  In late winter or very early spring the mother will run off the males.  Sometimes the males go away easily and sometimes it is very hard to run them off and it takes days and days and at times even weeks.  These poor boys don't know why they are being run off and it really hurts their feelings!!  In this process sometimes  the girl will leave too but usually the girl will stay around. Johnny and Donny were ones that it was very hard to run off. Their Sister left before the boys did.
The reason the coons run their male kids off is to keep from inter- breeding and it works really well.  ANYWAY~~~~~~~~~~~~~~~~~~~

Late winter Johnny after being gone for 3 years came home!!!  He came home to a place where the last 2 females had been killed by the fox that lived next door so he was welcomed!!!  He stayed out of the fence the way he had been taught years earlier. Johnny knew me as soon as he saw me and I knew him. People did you know that a coon will do a happy dance???  They will if they are happy enough!!!   He did!!!!  I went and got him food right away.  I talked to him while he ate.  He came back the next day and the next.  Johnny stayed around for about a week then was gone a day, then back with a female. They were 2 happy coons.  This lasted a couple of weeks. Then his girlfriend got herself killed!!!  Johnny was alone again but not for long.  He had another girlfriend with in a week and then another and then another. When they started taring up next door the girls left really fast but Johnny stayed.  He moved in the fenced in yard and found a tree.  This lasted for weeks -----  then Johnny was gone. He was gone only for a couple of days and then he was back with one of his girlfriends that he had here before. He was here only a few days then gone again.  We thought he was gone to get his other girlfriends but he has been gone to long now.  Maybe he is not coming back.  I have not named the girl coon he left here yet.  She is nursing babies.  I am sure they are Johnny babies.
What should I name her and people if they stay around long enough they learn their names!!  Really!!!