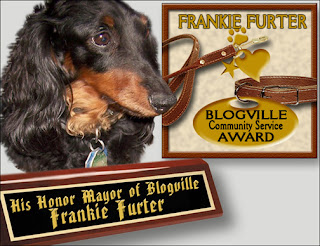 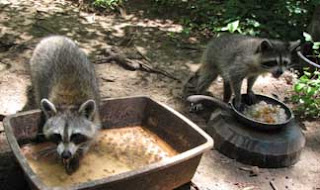 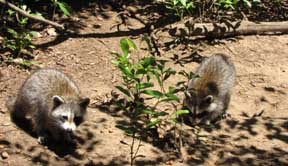 I have been thinking about old friends today.  Frankie is an old friend since I first started Blogging.
Also been thinking about the coons.  I have had a relationship with the coons since I have moved here back in the early 70's. They were always around and I was afraid of them b/c I bought in the idea that they were mean and very dangerous.  They can be very destructive , YES!!  One came on the back patio by braking through the screen and I shot that poor coon.  I felt so bad about killing that poor coon I cried for that coon.  I said I''ll never kill another.  The next thing happened I found one laying just on the other side of the fence really sick so Tom and I took him to the vets.  He had distemper.
They made him well and they brought him back and that coon became my first coon friend.  He was very friendly and would visit with me everyday outside the back fence gate.  He got very thin and I realized he wasn't finding enough to eat.  I started to feed him and then he brought his mate to meet me and then in the spring he brought his new babies 2 baby coons.  That was the beginning. To this day I put out some-- a small amount just enough to supplement their diet.  I don't have the good friends I use to have but the other night when I went out to donate a little something and Coon Johnny came and I had not seen him in over 3 years.  He knew me tho and was real happy to see me b/c he knew he was getting something to eat.  My relationship with them has been over 25  years...